So we’re up and running again. It was great to be at the Boleyn for the pre-season friendly against Deportivo La Coruna for the SBOBet Cup.  Even better to win it on penalties.Avram Grant has won silverware in his first home game.

It was a hot day. I could have done without wearing the tie to be honest.

Outside the ground beforehand, everyone was smiling. I think there’s a sense of optimism about the new season, the new manager, the new kit and a new beginning.  I nearly said ‘a new hope’ but that’s a Star Wars film..

I thought I better take a few pics to spice up the blog. I snapped a few of the ground, which I’ll be dropping in over the next few weeks. Andrew the ‘Over Land And Sea’ fanzine seller took the top picture of me outside the ground, so it only seemed right that I returned the favour and took one of him. Nice ‘Only Fools’ tee shirt mate. 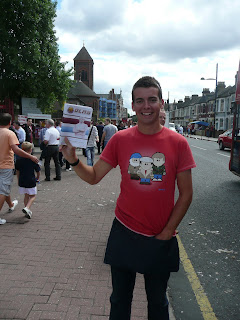 Football chairmen often need security for their own protection when they arrive at grounds.

Our David Gold is a bit different, he’s worn the claret and blue and he’s popular with fans. He needs the security escort otherwise he’d never get through the crowd of autograph hunters. He did sign plenty though. 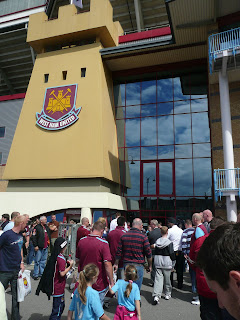 In the tunnel pre-match club photographer Steve Bacon was snapping the mascots. 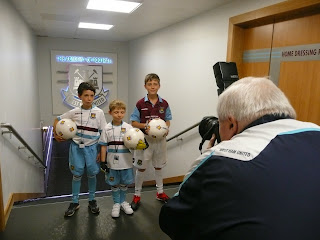 Meanwhile the other mascots, the furry ones, seem to have spent the summer hiding in the shower. I share a changing room with Bubbles and Herbie. It always makes me laugh when I arrive to see their heads sitting patiently waiting for the human inhabitants to arrive.And always smiling. 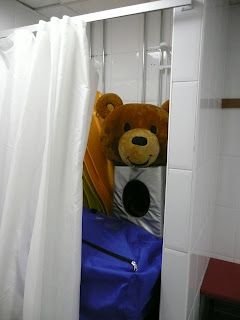 I did my best to pronounce the Spanish names as I read out the team sheets. I didn’t want to ‘go native’ as there’s a danger of sounding like an Italian with a lisp. I wrote them out phonetically after consulatation with a member of the Deportivo coaching staff and then did my best, using the English abroad approach of loud and confident.

As it wasn’t a premier league game there was no TV coverage to worry about, so the ref wasn’t waiting for a floor manager to give him the nod to ‘walk’ the players. That makes it so much easier to coordinate the playing of ‘bubbles’ so it reaches a crescendo as the teams emerge from the tunnel.

Avram Grant was given a great ovation for his first home game. The new players were all warmly applauded before the game and as they came on as subs. When the Sir Trevor Lower fans sang ‘Avram, Avram, give us a wave’, he did and was cheered. That’s was an important moment for me and a promising sign for the season. Gianfranco Zola would never respond to chants for waves. It was because he was ‘in the zone’, but it’s important to acknowledge your own supporters.

The match itself certainly wasn’t a cracker, but the penalty shoot out was. All of our penalties were scored with certainty and Robert Green made a great save. If you are looking for further comment on the match itself, you’ll need to look elsewhere on the web. That’s not the aim of my blog and it would clearly be a conflict of interest with my role as MC Hammer.

From the announcer’s point of view, the match was notable because there wasn’t any time added on in either half.  After announcing five Deportivo subs and three for us, I thought there might be a few added minutes in the second half, but no. I asked the fourth official if he was sure. He smiled. I cheekily asked him if it was his first ever game in charge. He smiled again and said he couldn’t remember any subs. I smiled, in case he booked me.

My favourite sub for Deportivo, was Riki, who I announced as Bianca’s favourite.If you can’t chuck in an Eastenders gag in a pre-season friendly, when can you?

As each Spanish sub pulled on their shirts, I noticed they were all wearing heart rate monitors. It seemed strange, but it’s OK in a friendly, as long as you have the ref’s permission.

On the way home I notice someone had put an England flag on the World Cup Heroes statue. 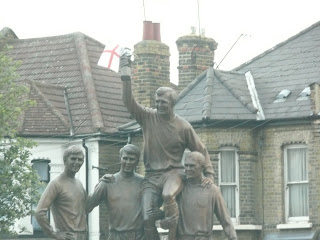 My journey home was slow. My regular short cut through the Isle of Dogs was scuppered by road closures for  a triathlon the next day. I listened to 5 Live and cheered on Derby County as they beat Leeds at Elland Road. Nigel Clough had stopped the Derby bus short of the ground before the game and his players had walked the last few hundred yards through the Leeds supporters. It was an echo of Don Revie’s actions when he took his Leeds team to the old Baseball Ground to play a Derby team managed by Nigel’s dad Brian. It was a scene I’d watched on TV a few weeks before in the  film ‘The Damned United’. It seemed to work. Having braved the fans outside, the fans in the ground held no fear for the Derby players.

606, the football phone in followed the match. What a joy, no  Alan Green or Spoony,  it was presented by Mark Chapman, who is always entertaining. I hope he’s got the gig for the season. Better still Derby captain Robbie Savage finished the match and then joined Chappers to co-present the show.I’ve never known that before.

Robbie is carving out quite a career as a media pundit. Of course he loves the sound of his own voice, but he is a good listen. He could do very well. There’s not many footballers who come across as well. I’ve regularly interviewed him at Leicester and Derby when I’ve been working for BBC East Midlands Today. He’s as charming in real life as he is irritating on the pitch.

So Robbie and Chappers accompanied me all the way home. On arrival I found the house full of children’s clothes hanging out to dry. My wife had met a Nigerian family in Twickenham Tesco. They were on holiday and staying in the hotel at the rugby ground. They asked my wife for directions to a launderette. Instead she had brought them home and done the washing for them. Slightly strange if you ask me, but that’s why I married her. She’s a lovely woman. And she does the washing.

You’re brilliant. You should be on the stage. And there’s another one leaving in fifteen minutes.

This is an old joke from the days of the Wild West, as told by members of the National Speakers Association of Dodge City.

Of course, stage coaches are long since gone. They would have been gone a lot quicker if their wheels hadn’t gone backwards in the old films. Something to do with motion capture and frames per second.

If you get off that stage and start walking about in the audience, you have stopped being a speaker and you have become a trainer.  Not that there’s anything wrong with trainers. I own several pairs. They are very comfortable and supportive and make me feel like running.

Of course when times are hard, like most speakers, I do my fair share of training. But I keep it quiet. The training page of my website has a WordPress widget which is an animated librarian who makes a Shush noise.

No of course it doesn’t, but here comes the point of this article. (It’s a bit like the L’Oreal advert where you have to sit through a lot of hair flicking, before you come to the science bit.)

I compere events, where there are many speakers across the day. I watch in horror as speaker after speaker, leaves the stage to wander among the audience. They’ve probably been to some session on presentation skills, where they are told it makes them appear more human, if they connect with the audience. Let me tell you, this is nonsense.  If you are on the stage people can see you better because you are in the light and you are raised up. They can hear you better because that’s where the microphone works best, without feeding back on the speakers.  Besides who wants to be human? No-one pays to hear a mere human speak, they want a guru.

The other week I was at an event, where six  out of eight speakers left the stage during their talk.  It meant the people in the front were having to crane their necks round to see them. The camera operators were struggling to find them in the dark. The shorter speakers might as well have been in a hole, for all we could see of them. (Yes I admit it, I’m only5’8″, that’s why I like the stage.)

You don’t have to stay on the podium or behind the lectern. It’s OK to move about, whatever Toastmasters tell you. But it’s not OK to get off the stage. It just isn’t. Not unless you are luminous, tall and have a very loud voice.

God invented stages so we could stand on them.   OK maybe it wasn’t actually God, but Jesus was a carpenter and he probably built a few stages for the Nazareth Speakers Association in his time.  When he was talking to his followers he probably couldn’t afford a stage, so he would stand on a hill. We’ve all heard of the Sermon on the Mount. Well we wouldn’t have heard of it, if it had been the Sermon in the Hollow, because no-one would have been able to see or hear Jesus.

So the next time you are onstage talking to an audience and you are tempted to go amongst the people, please don’t. It’s not big and it’s not clever.

I would have given individual feedback to all the so called speakers, who wandered off the stage in search of the common touch, but they wouldn’t have thanked me for it. I’m not Simon Cowell.  Besides, they all had more than enough feedback on the day, because they wandered too close to the loudspeakers!

(If all the world’s a stage, where are the audience going to sit?)